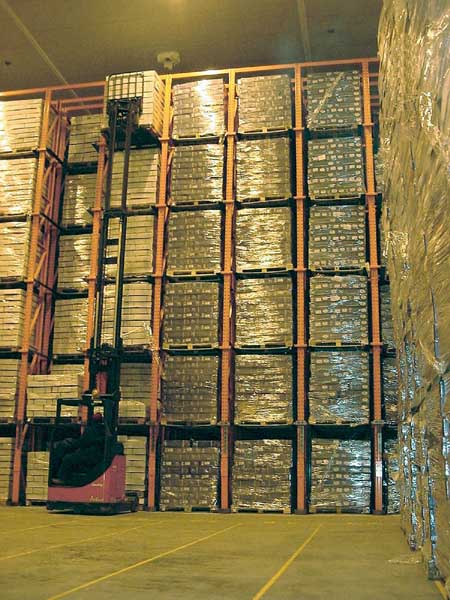 Peterhead, Scotland’s most easterly fishing port, handles the largest volumes of fish landings in the UK. Whilst the white fish sector, is facing an uncertain future with the imposition of restrictions on catch sizes, there is some cause for optimism. When Redirack completed an installation of drive-in racking for Pelagic Freezing (Scotland) Ltd they were soon made aware “pelagic” refers to the type of fish – herring and mackerel – which the company primarily processed.

“Redirack has a good reputation in the industry and we have been extremely impressed with their advice and service. We will be seeking their thoughts regarding the next phase, although it’s fair to say that we will opt for another block of   Drive-in.”

Now part of Lunar Freezing the company provides grading, packing, freezing and cold storage facilities to the fish processing industry in North East Scotland. With three automated packing lines graded fish is packed into cartons and labelled, according to product type, weight and freezing date. The cartons are automatically loaded into blast cages, which are stacked and loaded into one of four blast freezers. After eighteen hours, the cages are destacked and the frozen cartons transferred onto pallets and shrink wrapped for transferring into the cold store. The cold store has a capacity of five thousand tonnes and is kept at a temperature of -27 degrees.

Due to the seasonal nature of the fishing industry, Pelagic Freezing’s cold store fills up three times a year and then empties over the following three to four months. Individual pallet selectivity is not an issue, maximising storage capacity at the peak times is. Drive in racking is the perfect solution. The first block, giving 2016 storage locations, was installed  to coincide with the cold store’s opening. The drive-in racking concept is very simple, it consists of standard racking uprights arranged in a block without any pallet racking support beams. The uprights are connected at the top to give the structure stability and are normally spaced one pallet apart. Pallets are supported by pallet rails, running from the front to the back of the block, at each level above the ground. The result is a high density storage system, similar to block stacking, but with marked improvements in terms of operational efficiency.

David Fasken, the company’s General Manager knows a thing or two about cold stores, having spent many years with Christian Salvesen. He believes that drive-in racking has delivered quantifiable benefits to the business. “During the first year, we had a large area of block-stacked product alongside the drive in racking. We proved for ourselves that space utilisation and product integrity are much better in the racking system.” He comments. “Product damage through crushing and fork truck driver error is virtually eliminated. The difference was plain to see and led us to believe that we needed to extend the racking”

A second block was installed this year. It covers an area of approximately 500 square metres. There are twenty-nine lanes, each capable of storing pallets eleven deep on six levels, giving an additional 1914 pallet spaces. In accordance with SEMA tolerances for storing 1200mm wide pallets, the lane width is 1415mm, with a clear entry of 1250mm between upstands. Each bay is fitted with low profile guide rails, which run the full depth of the racking, a feature which Pelagic’s fork lift truck drivers particularly like. The racking rises to a height of 9.9 metres. Pallet rails are at 1750mm, 3330mm, 4940mm, 6550mm and 8180mm. The added height in the ground floor location makes it easier for the fork lift trucks to enter and leave the racking system.

According to David Fasken the cold store development is not finished yet. “We have identified a further area that we would like to rack out.” He says. “Redirack has a good reputation in the industry and we have been extremely impressed with their advice and service. We will be seeking their thoughts regarding the next phase, although it’s fair to say that we will opt for another block of drive-in.”