“Redirack performed exceptionally well and delivered our racking system on time and to budget. Its team advised and assisted us all the way, from initial design through to installation and commissioning.” Said David Law, Law Distribution’s Managing Director.

Established in 1992, Law Distribution specialises in contract distribution. It provides a range of services, including goods storage, order picking and delivery. Flourishing, the company has recently relocated to bigger premises in Haydock, Merseyside.

The new warehouse is divided into four 25,000sqft interconnecting chambers. Leaving one free for future expansion, three of the four chambers are presently utilised. One of these incorporates a 10,000sqft flammable goods store. In total, there is space to store nearly 15,000 pallets, tripling Law Distribution’s previous warehouse capacity.

Redirack wide-aisle and narrow-aisle racking has been installed in the new warehouse, its layout balancing the need for maximum storage with the efficient movement of goods. The racking follows the contours of the building’s roof, rising to nearly ten metres in places.

In total, there are ten single and seventeen double runs of pallet racking in the three chambers. The racking runs vary in length.

The narrow aisle area has cantilever P&Ds to get pallets into and out of the system and the forklift trucks are guided by low profile guide rail. Sacrificial legs are installed on the vulnerable aisle end uprights, so in the event of accidental damage disruption is minimised.

Wide aisle areas are arranged around a four metre aisle and are serviced by reach trucks. Again sacrificial legs are used but on all the uprights. In the bottom locations pallets are stored on the floor.

Throughout the storage system the beam levels and the number of beams per bay vary to give Law Distribution the flexibility they require to handle different pallet profiles.

David continued; “Our racking system took just a month to install. The move to the new premises was very hectic but Redirack and its installers were very helpful, allowing us to load pallets in completed sections while they worked in other areas. An excellent job all round.” 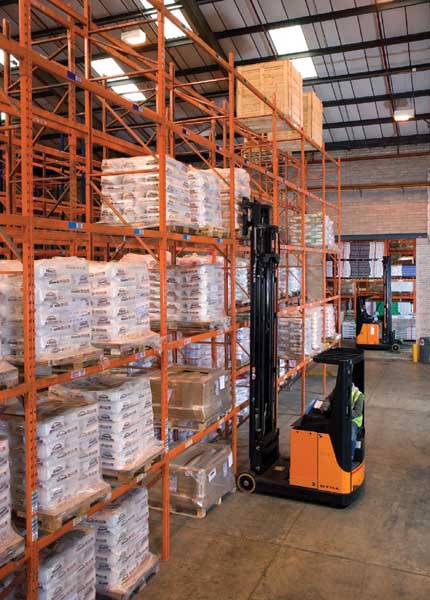 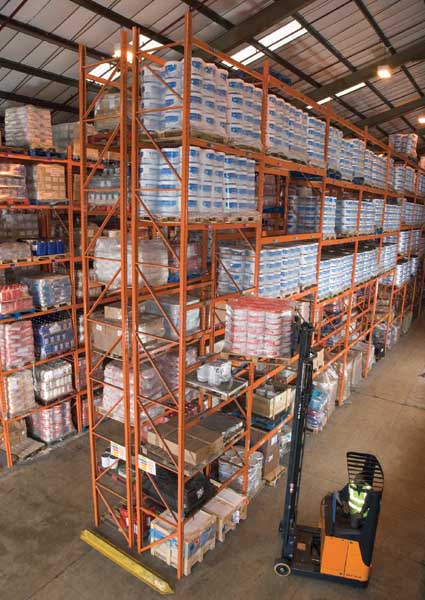